The use of crab apple trees (Malus floribunda) for orchard pollination was developed in France by INRAE in 1976.

The advantages of using Malus to pollinate apple trees (in comparison to commercial varieties):
– Flowering is abundant and long
– They bloom on different wood ages, especially on 1 year old branches
– To plant one variety per block
– They are less susceptible to diseases
– Pickers avoid mixing varieties
– Their weak growth allows them to be planted between trees
– Their unusual S genotype allows a better compatibilty
– The better pollination induces a better efficiency of the chemical thinning
– They pollinate triploid varieties
– They are usually not susceptible to bienniel bearing

More info:Malus should not be topgrafted in orchards, because they are susceptible to diseases of degeneration 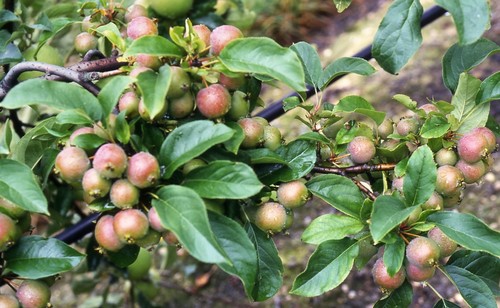 You can review all editions of our Pommoscope magazine.
Retrouvez ici
tous les numéros de nos Noyauscopes.
Back to advice